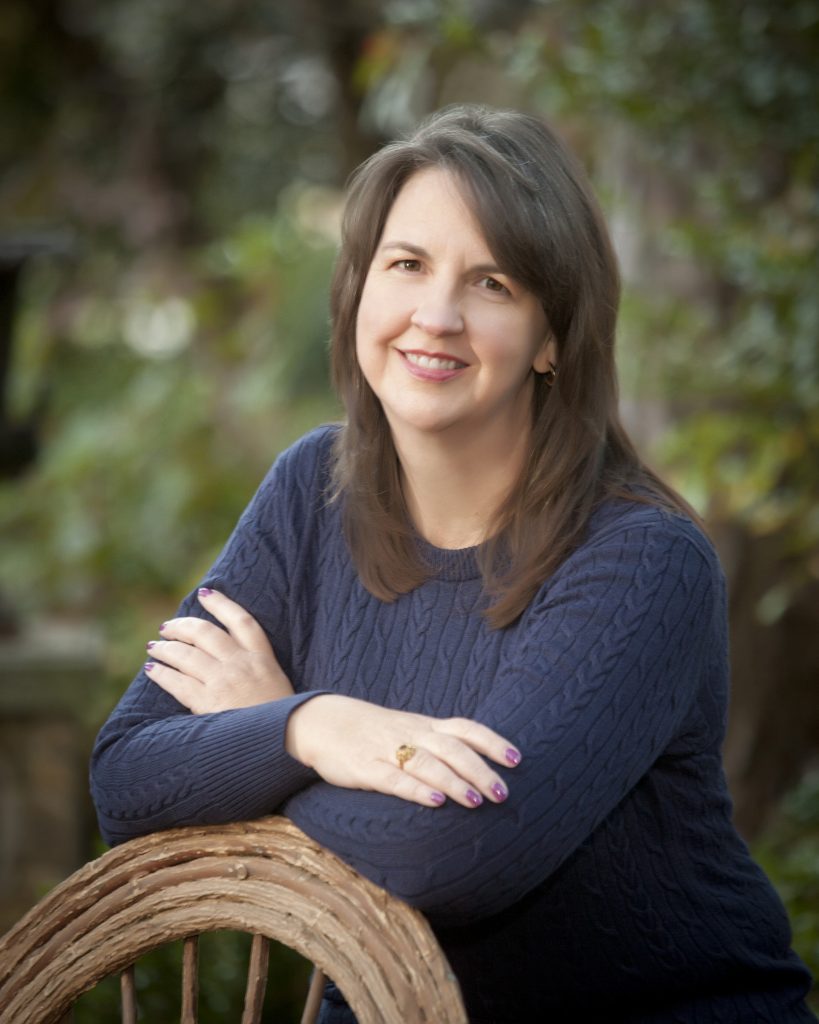 Deena Seckinger grew up in a Delta Air Lines family, traveling the world as a passenger, but it wasn’t until she was 10 years old and her dad gave her an experience that lit a fire inside that she had any interest in actually flying the plane. 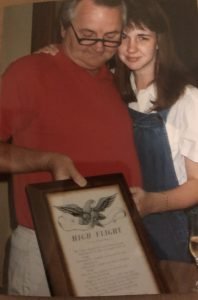 “My dad was absolutely without a doubt my best friend my whole life,” she says. “He always wanted me to get into flying and he’d take me out to the airport and we’d watch the airplanes, and I couldn’t have cared less about it. Even being in the back of airplanes, going on trips, it was just never a thing for me. When I was 10 years old, he took me into a Delta simulator, and I actually got to fly the simulator.”

It was the moment that changed everything for her. “I looked at my dad and said, ‘This is what I’m going to do for my job. I’m going to fly airplanes for my job!”

With more determination than most, Deena started lessons at 15, soloed her first flight at 16, and got her license at 17 at Berry Hill Airport in Stockbridge. 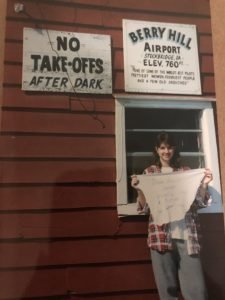 After graduating from high school, Deena moved to Sanford, Florida, to attend flight school at Airline Aviation Academy which was owned by a Delta captain. “I thought, well this is my ticket. If I go here, he’ll train me the way Delta wants people, and Delta will hire me.”

“That’s all I ever wanted was to fly for Delta, specifically,” she adds. “I thought Delta was the most amazing thing in the world. The pilots looked so cool! They had the double breasted suit jacket and the hat, and they always looked so sharp! The paint scheme was so cool, and they had all the best airplanes. My dad worked there and he was in one of their commercials, so in my mind, as a little kid, my dad was basically a movie star,” she laughs.

Deena was in a six-month accelerated program at the flight school, received multiple ratings—everything she was capable of earning at her age—and began teaching others to fly by the time she was just 18 years old.

Upon college graduation, the economy had hit a major downturn, and Deena found it was a difficult time to get a job. She kept up with instructing, ferrying airplanes, flying corporate, charter, and sightseeing flights out of Falcon Field and DeKalb Peachtree airports, among others. And eventually, Deena was hired to fly a commuter plane for Northwest Airlines/Express Airlines as a First Officer on the Jetstream 3100 (a 19-seat turboprop based in Hattiesburg, Mississippi) and flew for them for three and a half years, before landing her dream job with Delta in 1999.

She was hired as Flight Engineer on the Boeing 727 flying out of New York—a flight engineer, or second officer, is a pilot who is not in a flight seat and handles all of the airline systems and administrative duties.

“It was absolutely amazing. It was just surreal,” says Deena about being hired on. “I always knew I wanted to fly for Delta, and I always knew it would be great, but until you actually get there, you have no idea how amazing it is.”

“There is an absolute freedom that comes from breaking the bonds of earth and becoming airborne,” she says. In the cockpit, you hear “V1” and the decision is made to take off. “It’s like Christmas Eve with the anticipation. Then you hear ‘rotate’ and you ease back on those controls and you take this powerful machine off the surface of the earth and go airborne with it, and it’s just miraculous.” 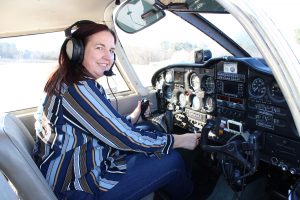 By 2015, Deena worked her way up to being a Captain on the 737. But within the year, she developed a problem with her vision that grounded her for 26 months while doctors worked tirelessly to discover the cause and get her back in the air. She encountered several misdiagnoses, but wouldn’t give up. The Mayo Clinic in Jacksonville finally discovered that Deena had a magnesium deficiency that was the root of the problem. “They had a fantastic team down there,” she says. “They understood that not flying again was not going to be an option for me. I was only 45, too late to start another career, and there was nothing else in the world that I wanted to do.”

“I took a hard look at what it was about flying (aside from the actual flying) that meant so much to me,” she remembers, “and the answer was simply that I love connecting people, helping people, being a factor in making a difference in people’s lives especially when they never know it was me that did it. I love that I carry servicemen and women home to their families at the holidays or on various leaves. I love that I deliver children to visit grandparents on the other side of the country. While it breaks my heart to ever return a soldier to lay to rest, I take great joy in knowing that we do provide that service, and we give great comfort to their family and friends knowing they are cared for the entire journey.”

In her down time, Deena made the best use of her time helping others. “I was still at a loss for this other hole in my life. When I realized that being of service was and is an integral part of who I am, I began volunteering and filling my life with behind-the-scenes work for others. Bloom was a huge part of making me feel whole, and I spent many hours volunteering in the Bloom Closet. I also taught classes at the women’s day shelter in Atlanta to aid women who had become homeless. I taught on Mondays for a year and had wonderful experiences learning from those women.

”Deena returned to work in 2018 as the First Officer on the Boeing 737 and began supporting others who were following the same dream she had. “I extended my gratitude to the skies and have given thousands of dollars annually to help other pilots follow their dreams. Often, those scholarships are based on not giving up or conquering fear because in the essays those pilots submit, they also get the opportunity I had when I was on disability—the opportunity to reflect on where I’d been, where I was, and where I was going all by boiling down what was core to my being.”

Deena upgraded to First Officer on the Boeing 767-400 in 2020, flying internationally on one of the largest planes in Delta’s fleet, a wide-body, heavy jet. She hesitated to make the decision, considering instead to wait until her youngest child graduated so she could be home with her for a bit longer. But her daughter encouraged her to take the opportunity. 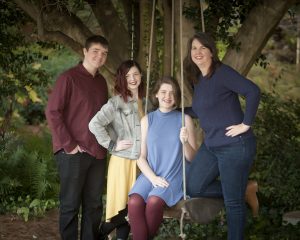 Deena’s three children, Olivia, Jax and Emily, have been her biggest cheerleaders through it all, she says. “I am grateful that this career has afforded me the opportunity to raise my children unschooled, and they are amazing people you would love to know.”

“None of it would ever have been possible without my father’s guiding hand and undying support,” she adds. “He thought that the sun came out just for me and the rest of you got to enjoy it.”

“I have 15 years, six months, and a few days remaining as an airline pilot,” Deena says, “because the FAA mandates our retirement at age 65. It feels like it will be only moments before I take that retirement flight, and I intend to savor every one of those moments and use them to continue doing what I love while helping others in the process.” 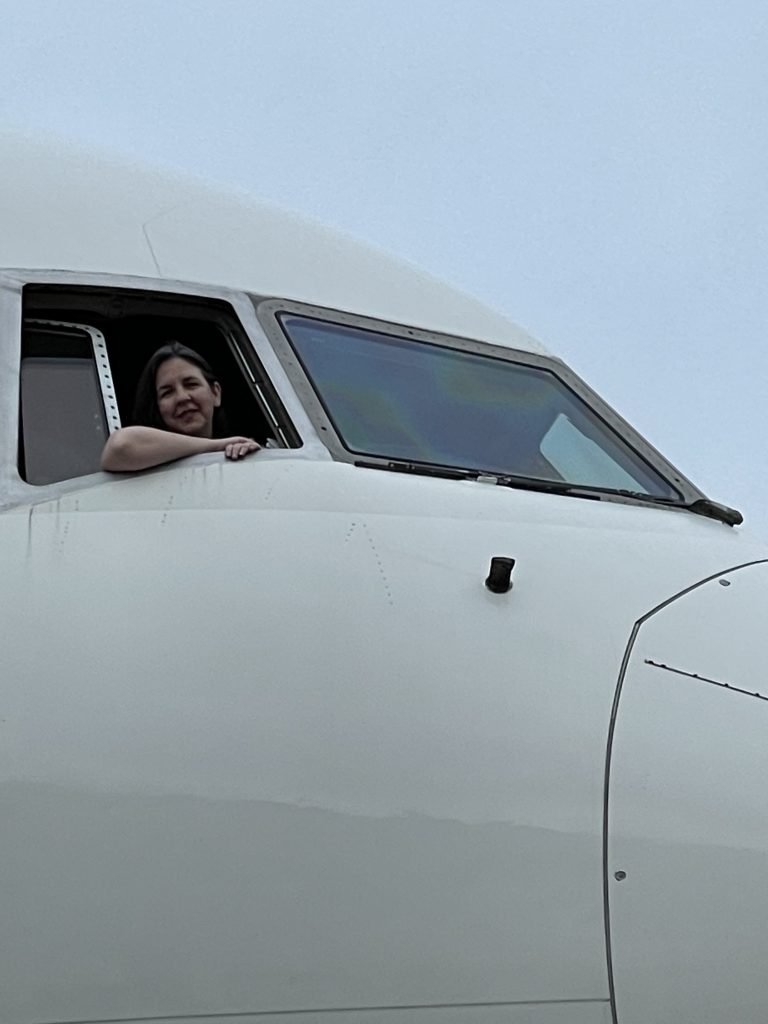 Lessons Learned in My Garden