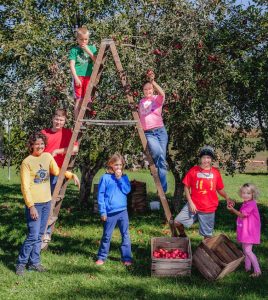 Seven years ago, upon the passing of my parents with whom I was very close, I came up with an idea to honor their memories and broaden my knowledge. This would be a huge undertaking, and unlike anything I had attempted to date, in my career as a professional photographer. My goal was to seek out individuals in all 50 states who are passionate about what they do. This became the Passion America project, making their portraits, then candidly photographing them at what they’re passionate about.

As a photographer, I’ve done a fair amount of traveling in my career and a good portion of it was behind the wheel of an automobile. In the spring of 2013, I loaded up my Dodge Magnum with camera gear, backdrops, stands, grip, wardrobe, and plenty of snacks for a soft start. What better than to reach out to a few people whom I’ve developed friendships with over the years to pitch my concept and ask to be my first subjects? Not unfamiliar with the roadways from South Florida to New York, I headed north and then east toward Long Island’s East End. I throttled up with five subjects in sight within the Tri-State area: a sculptor, a musician, a fishing captain, a racehorse jockey and a photographer, all known and respected within their professions and trades. 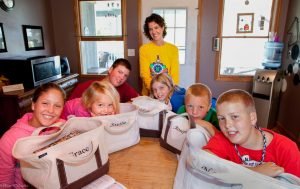 A few weeks later, I returned to home base and spent the summer planning the next phase of this project. It was going to be a doozy, driving from Key West, Florida, to Skagway, Alaska, and returning home. I’ve been blessed to build some wonderful friendships on this amazing journey I call life, and with the aid of a few of them, I was able to get a few more leads for photography.

Many subjects were acquired through cold calls. A “cold call” would be pulling into Anytown, U.S.A., toward day’s end and going to their visitor center, chamber of commerce, or diner to explain what I was doing. Eighty percent of the time, I’d have a subject lined up for the next morning!

“Passion America also came to be out of my love for this country.”

We hear of the negative within our great nation on a daily basis and it was my goal to seek the positive that is a part of what we are as a nation to inspire others with the hope that through dedication, all is possible. So many strangers were happy to open their hearts, homes, families, and businesses to be a part of this positive narrative. 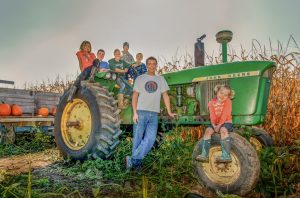 Two years earlier, I met a wonderful couple in Costa Rica while on vacation, whose home was in Southeast Michigan. While en route northbound for this project, I reached out and not only did we have a delightful visit, but Kristiane introduced me to an amazing woman, Jean Fisher, and her family. Now I’m a bit familiar with farming when it comes to bailing hay and shoveling stalls, but that’s it. The Fisher family is the definition of “the American Farmer,” and I was truly honored to peek inside their lives. It’s something most Americans never get to see, and likely take for granted. Jean, the mother of ten, all homeschooled and the best behaved and loving children I’ve ever met, is also an award-winning marathon runner. I dare say, she is the glue of her family, too. Upon arriving at the farmhouse, and prior to even being introduced, five-year-old Stella came running to me, throwing her arms around me in the most heartwarming embrace I’ve ever felt! 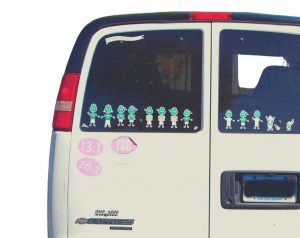 After introductions and explanations of my goals, we got to work, starting in the kitchen (classroom), then out back picking apples—which became a bit awkward when husband Ed came home for lunch from the fields and didn’t know who this strange man was photographing his beloved family, but all was made good quickly. So much so that later that day, I was photographing Ed and his son harvesting the soybean crops. Samuel, their 16-year-old was kind enough to take me for a few passes on their combine in the soy fields. The following day, I returned to capture the Fisher children working together as a productive team while harvesting pumpkins. Leadership skills were exercised and had been instilled in them by their amazing parents. I learned a great deal in the time spent with the hard-working and loving Fisher family of rural South-Central Michigan: Work together and great things can be achieved. I departed a richer man!

Take to the road, see this beautiful country, meet people from different walks of life; doing so enriches yours.