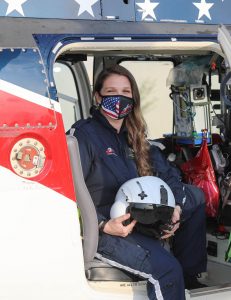 Whitney Whitlock-Stevens is a busy mom of two young boys, a wife to a firefighter, and she is a hero in the sky. At a moment’s notice, Whitney is ready to jump into high gear and climb aboard a helicopter to provide air medical care for someone in need, as she is a flight nurse with Global Medical Response.

“Flight nursing is most definitely my passion! I absolutely love it. The field is just so vast, and it has so many facets. There really isn’t anything out there quite like it, and I cannot imagine doing anything else!” Whitney says of her life-saving career. When she speaks of her career, she absolutely beams and even behind the mask, you can tell that she has a huge smile. 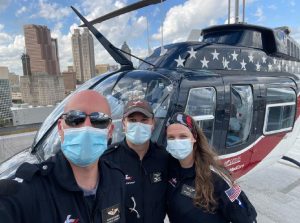 Starting her nursing career in 2010, Andrews says, Whitney transitioned to flight nursing in 2013 when she began flying fixed wing, which involves transporting critical patients of all ages both nationally and internationally on private jets. Prior to working in the air, Whitney was first an emergency room technician at a local hospital, but once she obtained her RN, she accepted a Registered Nurse position in the same ER. She was there about three years as a staff RN and then charge RN, working in the pediatric cardiac intensive care unit and neonatal intensive care unit. Working in an emergency department or ICU is a requirement to flight nursing. 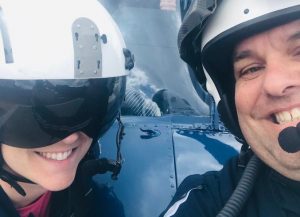 “When I first entered nursing school, all I knew was that I wanted to work with high acuity patients in the emergent department or ICU. Once I began working with local flight crews flying patients out of the ER, I found myself drawn to that career. Crews were transporting some of the sickest patients I had cared for, and I realized that it was for me. I knew it wasn’t going to be something to enter into lightly, so I began studying and learning as much as possible,” Whitney explains.

Whitney grew up in Brooks but now lives in Senoia with her husband and high school sweetheart, Andrew, who is also in EMS as a Peachtree City firefighter/AEMT. They have two amazing boys. Graysen, their 10-year-old, is described as a sweet, empathetic child. He seemed very proud of both of his parents when speaking of their career choices, but said that he might choose engineering as a field instead. Weylyn is an adorable twoyear- old, and as Whitney says, “He is everything you think of when you think of a rough and tough little boy!” They also have two dogs, Asher, a Weimaraner, and Elvis, a Great Dane. Whitney and Andrew stay very busy but with the help of family nearby, they are able to do what they love and help others. Both of them are in high stress jobs, saving lives, but when speaking of Whitney, Starting her nursing career in 2010, Andrews says, “She is my biggest hero!” 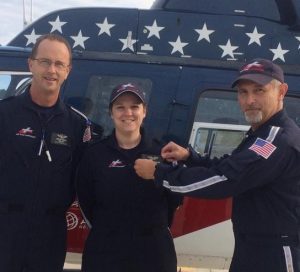 As a flight nurse, Whitney’s schedule is 24 hours on then 72 hours off. With both Whitney and Andrew having long shifts and never knowing exactly when they will be finished, there is no way they could do these jobs without the help of family. “I have been very blessed with two very supportive parents, Joe and Deborah, who are just simply the best! There is no doubt that I wouldn’t be where I am today without their guidance and support over the years,” Whitney says. “I am the youngest of three sisters who are also super helpful and supportive of both of our work schedules.” The medical crew stays at the base for 24 hours while the pilots work for 12-hour shifts. Because Whitney is also the Base Clinical Lead, she spends extra time at the base to provide training and education to others. The base is set up like a typical fire station with all of the amenities of a home.

On a medical call, the crew is composed of a flight nurse, a flight medic, and a pilot. Inside the helicopter, it is very tight quarters with the pilot, medical professionals, the bed, and all of the medical equipment. The bed can slide forward as needed, but Whitney laughs that the person with the shorter legs has to sit in one particular seat when transporting a taller individual.

Whitney thrives on being ready for whatever emergency arises and doing what she needs to do to help save a life. She says that her job is different every single day and that is what she loves. She says, “I think earlier in my career I was attracted to the challenge of the unknown and the adrenaline rush. Those challenges ignited a personal drive of desire to learn and grow to be the best nurse that I could become. The adrenaline-chasing part is definitely still there, but I have also grown to love and recognize other things about flight nursing. For example, being able to be there for people on their worst days and having the skill set and knowledge base to be one of the best parts of their worst day.“

On some shifts, they may receive one call, but on busier days, it can be up to four calls making it very stressful. Their typical service area is about 70 nautical miles per base. Whitney’s crew flies out of the Fayetteville location. Often, there are occasions where interfacility transports will take them further away than their regular transport area. Longer trips require preplanning on both the medical side as well as the aviation side. Necessary stops for fuel and oxygen are considered when taking these flights.

Although Whitney doesn’t have a lot of free time on her hands, she says that she enjoys spending time with her family either hanging out at home or traveling around to check out neat hole-in-the-wall towns to hunt for antiques. She also loves to read and says she could read for hours!

Whitney admits that the most rewarding part of her job is being able to provide critical care access to the patients who need it most when they need it most. Being a part of a person’s worst day and applying the skill set and knowledge base that she has learned can help make their worst day a little better.

When asked about the sacrifices that are involved in being a flight nurse, Whitney humbly says that she doesn’t consider them as sacrifices at all. “It’s not sacrificing when you are able to help a patient see their next big event in life, whether that be a dad walking his little girl down the aisle or a family member getting to spend another holiday with their loved ones. That is something bigger than me, and it is a privilege to be a part of something as life changing as that. Though I may miss out on a few holidays and birthdays, I don’t view it as a sacrifice, but as an honor to be a part of something like that. Just knowing your ‘why’ keeps it all in perspective.”

Those are the words of a true hero, sacrificing or delaying a little bit of happiness in order to provide it for someone else.

Stirring the Pot with Scarlett